This is an official trailer for the film I M 24, a film that celebrates the perks of lying! Boasting a stellar cast that includes Rajat Kapoor, Ranvir Shorey, Manjari Phadnis, Neha Dhupia and Lilette Dubey, this is a roller coaster ride of lies, laughs and love!

Have a look at the poster of film I M 24, a film that celebrates the perks of lying!

Telling the truth has always been more difficult than lying. The protagonist of I M 24, Shubhendu, lives by the tougher option. But when this honest, 42-year-old balding writer falls in love with a 22 year old model, he is tempted to lie. What’s more, his jerk of a roommate, Gagan, who swears by the magic of lies, helps him cook up stories. 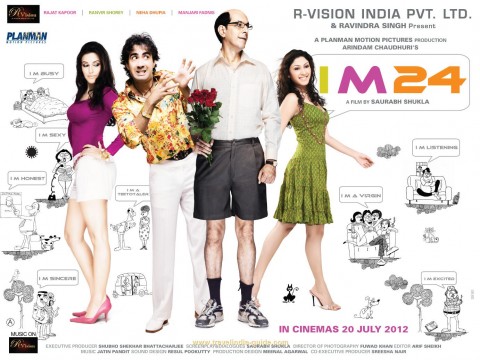 What follows is a hilarious ride of lies, cover-ups, goof-ups and contradicting tales. Shubhendu begins enjoying this ride. Why didn’t he know that lying was so much fun? But at some point, the madness has got to stop. The question is: When?