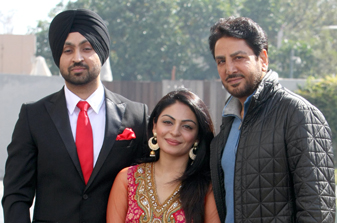 “The idea struck me two years ago, when I was shooting in Shimla,” explains Neeru about how she came to be a producer. “Later, on the sets of my film, Jatt & Juliet, I discussed with dear friend Diljit about wanting to make a film with Gurdas Maan ji and him in it,” Neeru Bajwa Said.

This movie will release on June 27, 2014. Baba Gurdas is as humble as always, saying, “Thanks to Neeru, es nacheez Gurdas nu yaad kita. On working with the new generation of actors, the singer comments, “I feel encouraged for they thought of working with an old artist like me. They are the stars of new era, so it’s a pleasure being around them and contributing to the growth of the industry.”