The OFFICIAL POSTER Of Chashme Baddoor

Hindi Movies Posters
Friday, February 8, 2013
1 Comment
The OFFICIAL POSTER of Chashme Baddoor. Chashme Buddoor is a remake of the Chashme Buddoor (1981 film) of the same name. The film stars Ali Zafar, Siddharth, Taapsee Pannu, Divyendu Sharma and Rishi Kapoor in the lead roles. Juhi Chawla and Anupam Kher are also set to play surprise roles in the movie. The film is directed by David Dhawan. The film is set to be released on 5 April 2013. The official theatrical trailer to be unvieled within 10 February. 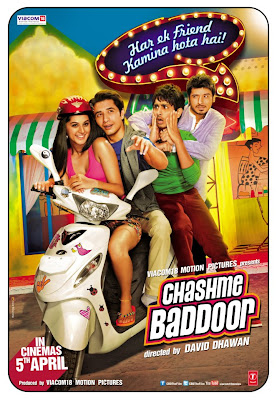 The movie is just fine....not to mention the awesome role played by siddharth and divyanshu....but the level expected by ali zaffar was not upto the mark....not at all by the actress and the storyline was way too weak for times like these where intellectual audience is waiting for awesome stories in addition to entertainment