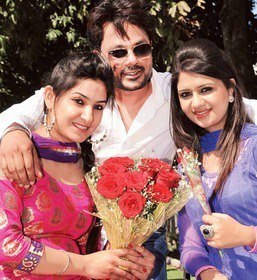 The slush green locales of Punjab Agricultural University, along with a few other locations of Ludhiana, will feature in an upcoming Punjabi film titled 'Rose'.The film will begin the shoot in city from March 7 with a crew comprising about 50-60 people.The film's director, producer and actors met the press on Friday to announce the project.

"The lead actor of the film, played by Chandigarh-based model Narinder Mahajan, is a London-born boy who comes to city to study at the University," shared producer Kamal Deep.Deep, who is based in UK where he runs a post-production studio, marks his debut in regional cinema with 'Rose'.The film, he said, will be shot in a budget of nearly Rs 1.5 crore. Apart from city's other locales such as a mall and an engineering college, parts of the film would be shot at Manali, Chandigarh and Jammu and Kashmir, he added.

About the title of the film, director Jasbir Singh, who comes with some experience in theatre said, "It has been kept after the name of the lead actress. The film revolves around her life and has a mix of romance and emotions. Yashu Dhiman, a model from Chandigrah, plays the character." Almost all actors have a theatre background, including Joshi from Ludhiana.
Like This Article? Share:
Newer Post Older Post Home
Subscribe to: Post Comments (Atom)