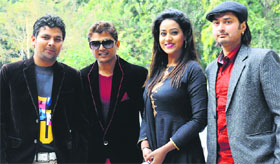 Punjabi cinema is going down again because of low quality movies. So, If you want to watch something different then wait for Game Of Love, a Punjabi film, a thriller that will change the game in Punjabi cinema!

This movie is directed by Goppy Dhillon, will be shot extensively in HP, Chandigarh and Punjab state. Goppy Dhillon has written the screenplay of the film and will be acting in it as well.

"It is a thriller that will be treated in a professional manner. Goppy is hopeful that the subject will appeal to the audience."

The movie, a wholesome entertainment, has a punch of comedy as well. "It is difficult to approach comedians these days, our film has comedy but it is not useless. It is a sensible comedy."