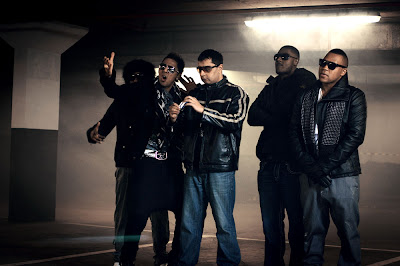 Sunny J from Offlicence shares ‘The song is about expressing yourself through what you do best. Whether that’s sports, partying or how you dress, it’s whatever you enjoy or do. Style is limitless and has no boundaries’

About Offlicence -
British Act, Offlicence are made up of Punjabi singer Sunny J alongside rappers Lexeye and Projay. Offlicence had their breakout year in 2010, the year Christian Audigier (UK) teamed up with the trio to endorse their music video ‘Maar Glassi’. In 2011 they released ‘Ghaint Patola’ which gained #1 on the World music ‘iTune store (UK) chart’ and rose to #2 on the ‘Official Asian Download Chart’. Now with over 3 million YouTube views, electrifying performances in front of crowds of 20,000 +, even receiving attention from popular radio DJ Scott Mills with a co-sign follow. Offlicence are now set to showcase why they are swift becoming one of the hottest diverse acts in the UK.

About Panjabi MC -
Panjabi MC became an international sensation with the 2003 phenomenal hit song "Mundian To Bach Ke." A new sound for bhangra was born and the Panjabi MC brand stormed worldwide winning multiple influential awards such as an MTV Europe Music Award, Best UK Act at the MOBO’s and the prestigious World Music award as one of the world's best-selling artists.

Throughout his career so far; PMC has showcased the ability year after year, album after album to produce timeless smash hits that have put him at the top of the industry. He has worked with a variety of influential artists and global brands including – Jay-Z, Beenie Man, Twista, WWF, Inside Man (Movie), Zumba, Beyonce, Lady Gaga, DJ Premier and Cher Lloyd to name a few all willing to be a part of the Bhangra fusion sound. As of 2012, ‘Mundian To Bach Ke’ is now cemented an all time classic having recently been included as the only British artist on the world #1-selling dance game ‘Dance Central 3’ and appears on ‘Just Dance 4’ alongside British artist Jessie J, One Direction and Cher Lloyd.

About Trilla Jermaine Trilloski -
Trilla, is a popular UK Urban artist well known for his singalong choruses and upbeat tracks. Some of Trilla's most popular songs are Etap ‘£17.50′, G Star, 0121 and Who Are Ya?. ‘Trilla’ is one of the most talked about and admired MCs in the UK since 2011 saw the iTune release of ‘0121’ hosted by the legendary Tim Westwood.  Trilla performed at Radio 1′s in ‘New Music We Trust’ alongside a host of UK urban acts such as, Tinie Tempah, Tinchy Stryder, Giggs, Skepta, Ms Dynamite and was selected for 1Xtra's special HomeGrown Takeover alongside artist such as Wretch32. With three of his tracks being featured on Ministry of Sound's "The Sound of Bassline 2" (more than any other artist), guest appearances on popular radio stations such 1Xtra & Kiss Fm, Trilla is arguably one of the biggest and best MCs from Birmingham that has broke the London-centric scene.