Bollywood
Saturday, February 16, 2013
No Comments
Legendary Rastafarian Bob Marley’s son, Rohan Marley, was in Mumbai along with  The Light of Life Trust hosted a charity gala and auctioned a range of earth-friendly, innovative audio electronics and lifestyle products by House Of Marley. Where British born pop icon and legend singer Taz of Stereo Nation who recently honored with wall of fame in Coventry were seen bonding with Rohan Marley event. Taz is currently in the town and he is searching a new voice for his upcoming Bollywood movie “The City That Never Sleeps” which is produced by Satish Reddy and Directed by Haroon Rashid. 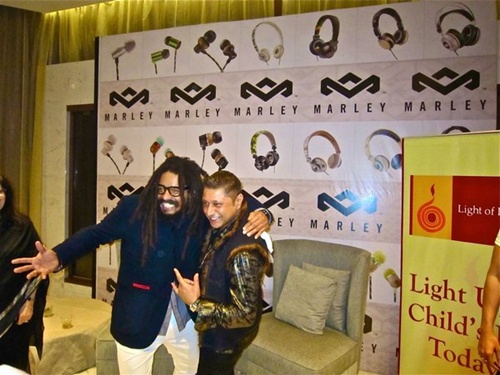 Rohan Marley said, “All of these products are made of sustainable materials, without compromising on the superior quality of sound and design. The collection is sure to conquer the heart of real music lovers in India and create trendy, fashionable statements. Taz is one finest singer I have ever seen and I am wishing him luck for his upcoming movie which is going to break 20 records of Guinness book.”

Taz of Stereo Nation is doing a reality show called “Mai Dunga Bollywood Ko Nayi Aawaz” for the movie “The City That Never Sleeps”, he said, “it’s a great pleasure to meet Rohan Marley and be a part of such a good social cause which Rohan is doing. I am very glad to associate with him and to support the needy Childs.”
Like This Article? Share:
Newer Post Older Post Home
Subscribe to: Post Comments (Atom)